For the second time we had a breakfast-for-dinner themed Game Night and we enjoyed the best. Breakfast sandwiches. Ever.

We also switched things up for the first time ever and had an open contest – there wasn’t a blind taste test, we judges knew who each sandwich belonged to. 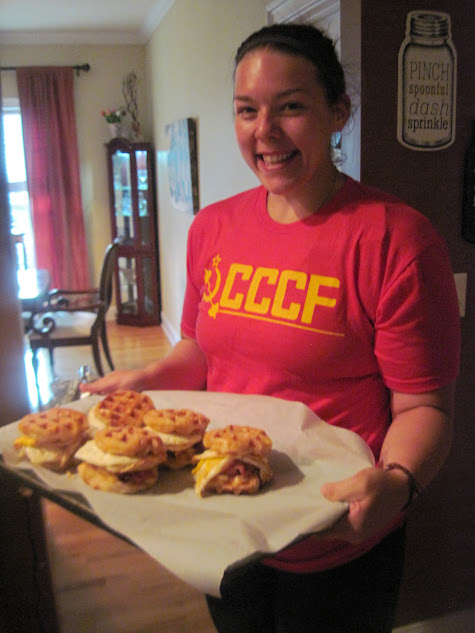 Did this alter the results? You decide.

The potato home fries, not pictured, were so excellent and I felt terrible because we were all too full to adequately enjoy them. I plan on trying the recipe later and will blog about it and you can see a picture then, but Kristi LaMonica’s potatoes are: 3 to 4 pounds white potatoes, scrubbed like crazy chopped into semi-large chunks, with 1 diced onion, salt, pepper, and paprika. Drizzle extra light olive oil over potatoes, cover with foil, and bake for 1 hour or more as needed at 425 degrees F, then at 350 degrees F for an additional 30 minutes.

Tara Nudi is not giving away her super s’mores cupcake recipe, so enjoy with your eyes and be jealous.

As a nod to the breakfast theme, we also had Lucky Charms cereal courtesy of Melissa Severson, which the younger crowd really appreciated. 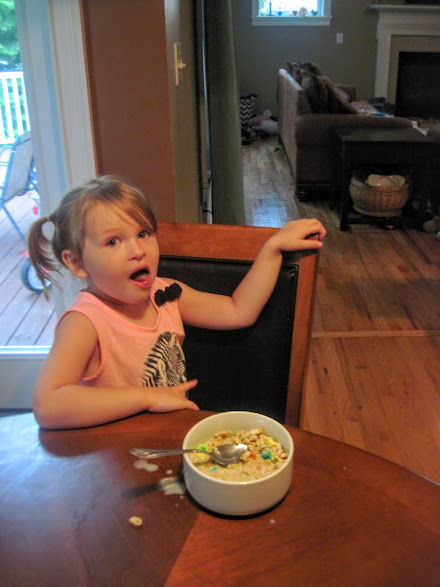 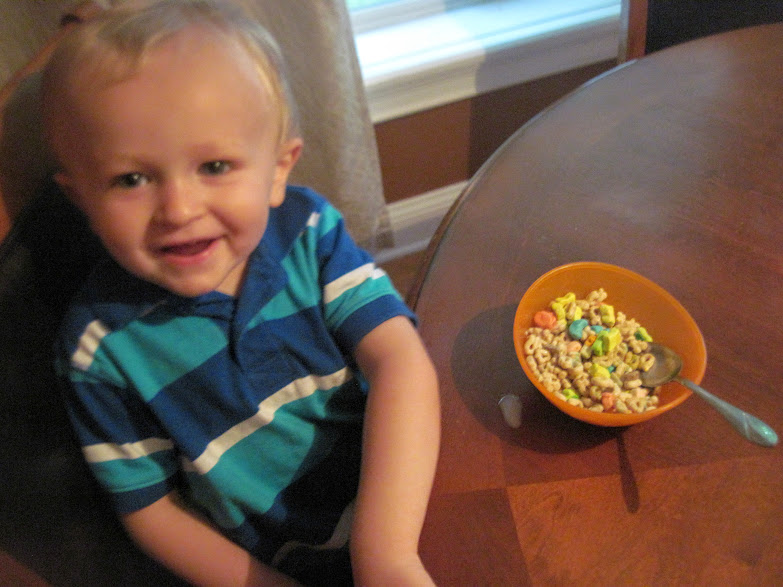 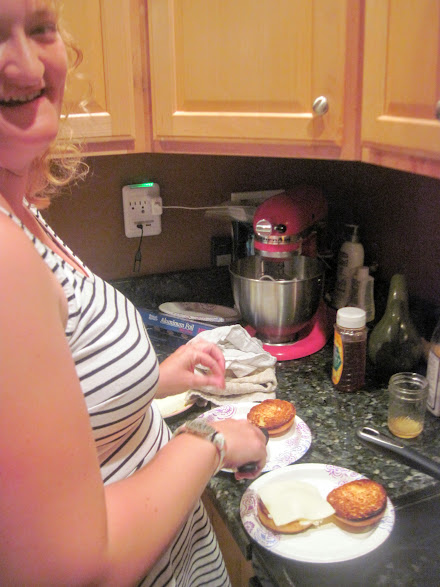 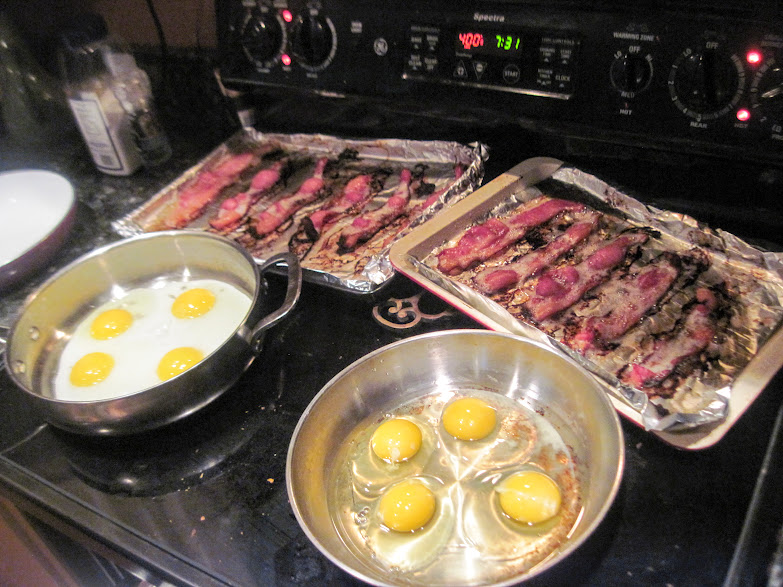 Final score out of 200 points: 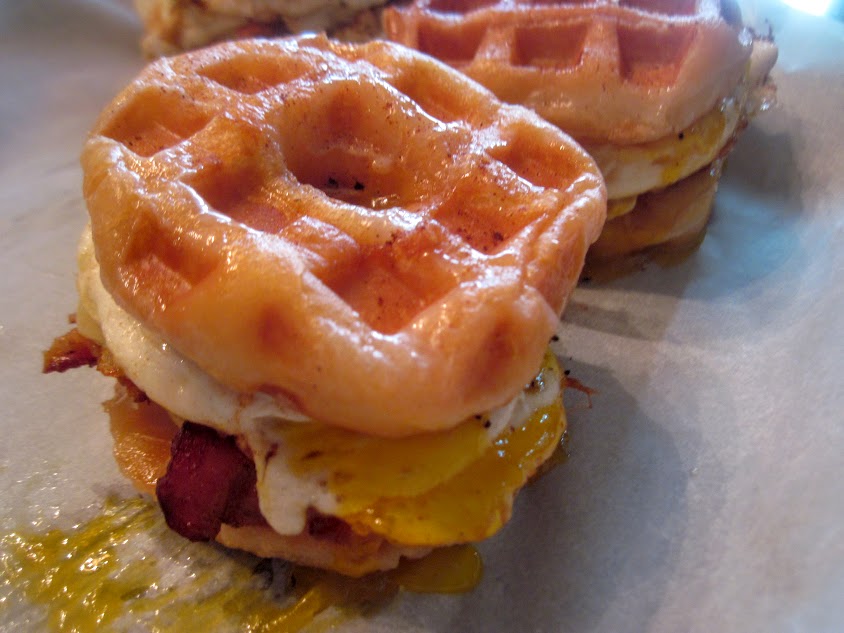 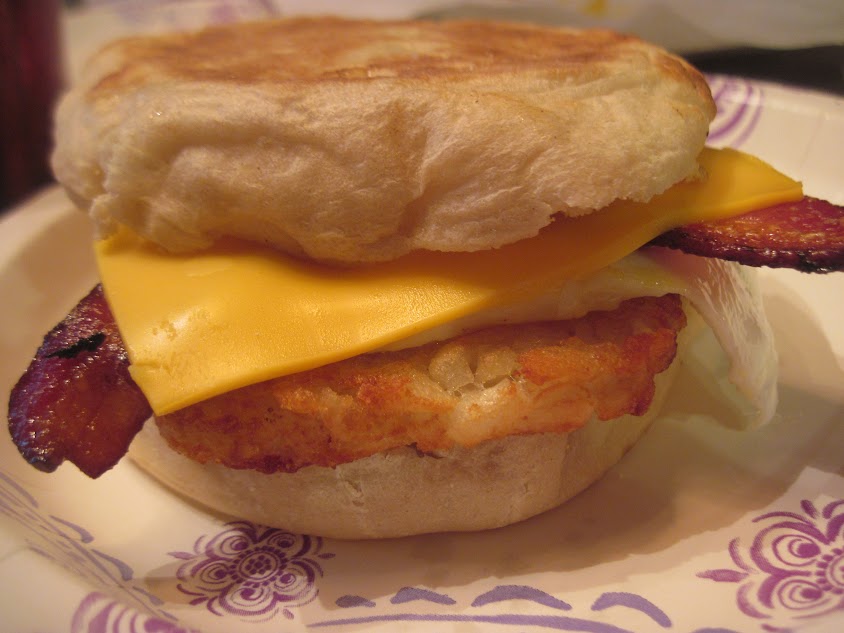 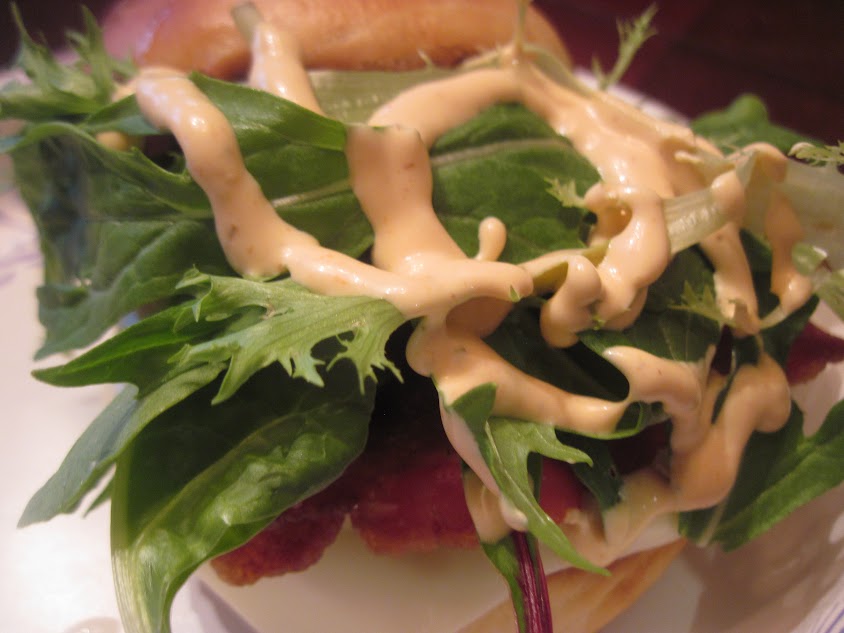 There was an overall consensus that Alan’s bacon was better than Sarah’s bacon even though they were both applewood smoked. You know what the difference was?

Alan baked his in the oven, which is what you are supposed to do, people!

(No offense to Sarah, who was probably pressed for time [baking it in the oven takes longer] and clearly she won, so it obviously didn’t hurt her that much.)

My own thoughts: I gave Sarah’s  a perfect score, my first perfect score given ever, because I literally couldn’t find anything wrong with it. Everything was there – the eggs were solid but also a bit runny, and I was pleasantly surprised by the waffled doughnuts. I don’t even really like doughnuts. I can’t think of the last time I ate a doughnut before this.

After seeing her recipe and that she used two eggs and two slices of cheese, I think that’s what did it for me – if it had been only one of each, the doughnuts probably would have been too overpowering for me. Not only did she nail the ingredients, she got the proportions perfect. 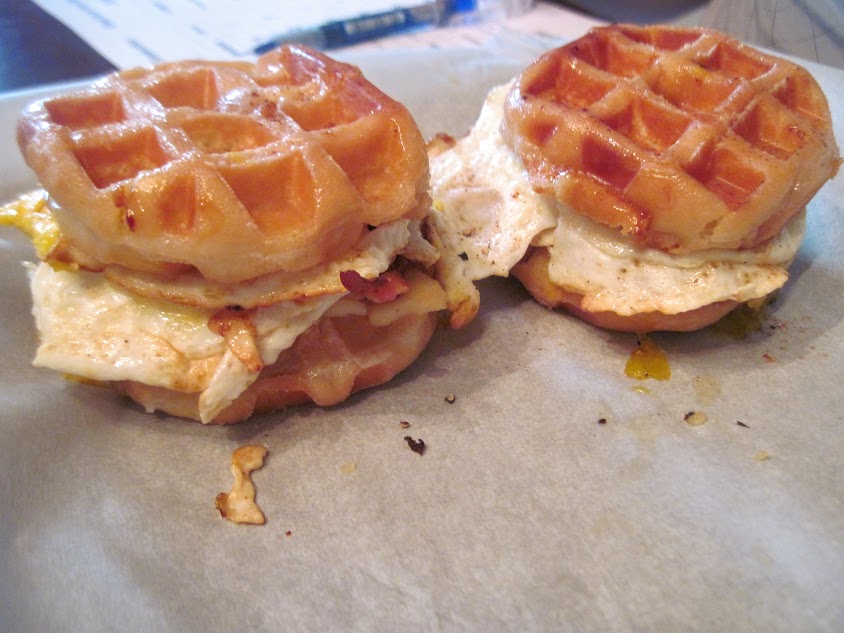 Alan’s was a very traditional sandwich, except for the hash brown on the bottom, which I was also surprised to find I enjoyed; knowing what he was planning beforehand, I thought that would be his downfall. But it worked. And he definitely had the best bacon. 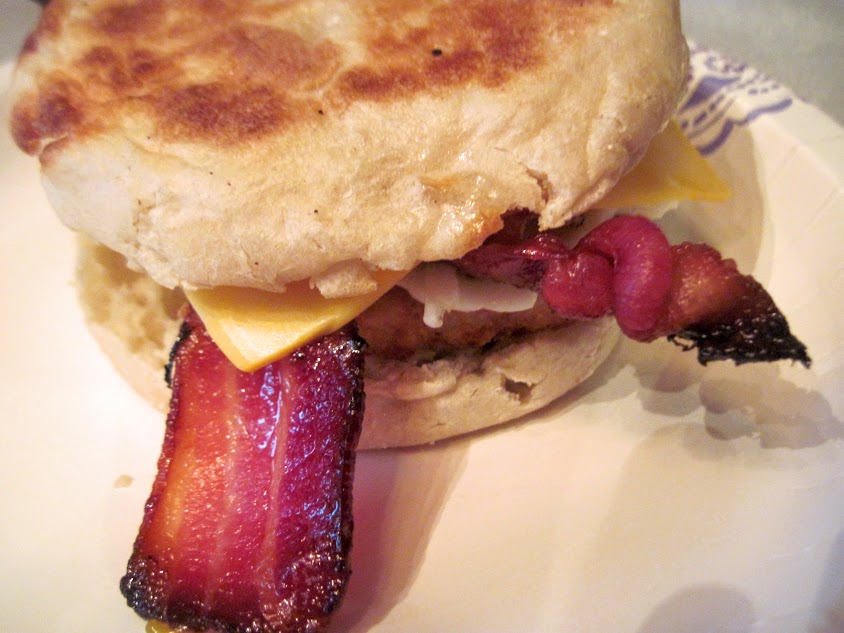 I also enjoyed Tara’s immensely. I did not find the greens off putting or not breakfast-y enough. I absolutely loved loved loved the sauce. If we could have put that sauce on Alan’s sandwich, it might have beat Sarah’s in my mind. Maybe.

Sarah’s sandwich recipe: 2 glazed doughnuts, 2 eggs, 1 1/2 slices applewood smoked bacon, smoked Gouda, salt and pepper, and cinnamon. Ingredients were cooked before assembling them. Doughnuts were pressed in a waffle iron on medium for 30 to 40 seconds, then set aside to cool slightly. Eggs were fried in butter over-easy or over-medium; bacon was cooked on the stove. Layers are doughnut, cheese, bacon, fried egg, cheese, fried egg, salt and pepper, doughnut, sprinkled lightly with cinnamon.

Alan’s sandwich recipe: Over-medium sunny side up egg, applewood smoked bacon baked in the oven, crispy hash browns on the bottom, American cheese on top, all on toasted, buttered, complete with supersized (these exist) English muffins.

Tara’s sandwich recipe: She made the rolls from scratch that morning, then buttered and broiled them for crispness. Rolls were topped with 1 sunny side up egg, 1 slice American cheese, 1 1/2 pieces of bacon, drizzle of honey, handful of spring mix greens, and an artful swirl of the sauce.; sauce consisted of Sriracha, mayonnaise, sour cream, smoked Tabasco, and secret spices.

Given this is Tara’s first loss ever because all of her dishes embody perfection, is it just a coincidence that this happened with the first non-blind taste test? Maybe. But maybe not. I’m hoping not.

I actually find I’m more harsh on the first dish I try – which was Sarah’s in this case. Maybe I was overly harsh of Alan’s and Tara’s in this case, because Alan is my husband and I secretly wanted Tara to lose, just once, just one time.

But again – maybe not, because really, Sarah’s was unbeatable, and for once, my conclusion concurred with the other judges – I wasn’t the only one who thought so.

Up next game night: Tara Nudi and I will meet once again, where I shall embarrass myself once again, losing in a vegetarian main dish competition. Stay tuned as I navigate the weird waters of blogging about my losses.