I had the third of six food writing classes this evening with the Table Hopping Times Union blogger Steve Barnes.

After I read it to the class, Steve made a good suggestion on something key I left out that should have been mentioned – can you guess what it is? 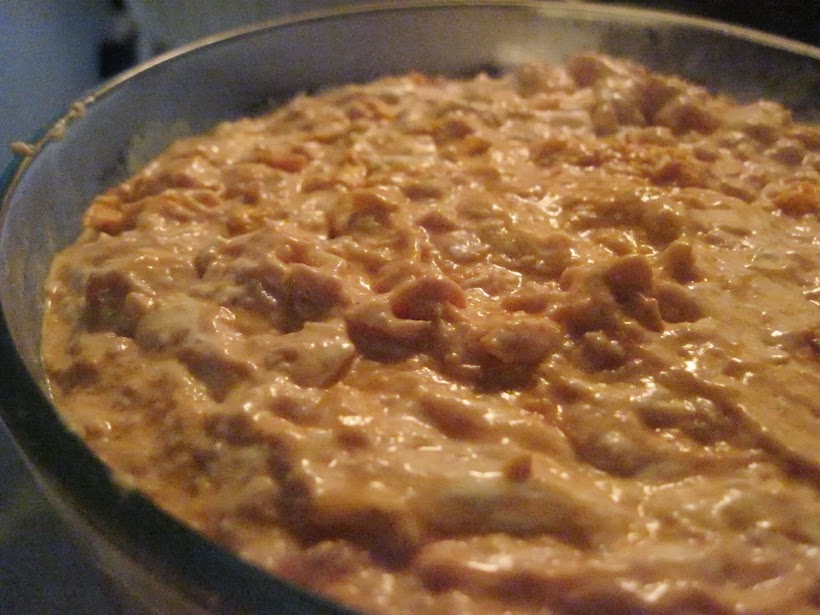 Buffalo chicken dip: aside from those sad few who do not like spicy foods, it’s always a crowd pleaser. I chose to make my buffalo chicken dip last weekend when I had girlfriends from out of town visiting.

I have made my buffalo chicken dip many times, and consequently it is one of those dishes that I take joy in making knowing it will always turn out correct. However, this did not happen right away, as luck has it with some recipes. I in fact had to achieve this perfect buffalo chicken dip through a series of trial and error.

In the beginning, I had one recipe for buffalo chicken dip – a slow cooker recipe – that I used religiously and everyone who ate it seemed quite pleased. It was a basic dish that I found on Food.com. The original recipe called for canned chicken, which I scoff at, even though I have never tried it – how can canned chicken possibly compare to freshly cooked chicken? Otherwise, I followed their instructions exactly, with cream cheese, hot sauce, Ranch dressing, and Cheddar cheese.

When I first made this appetizer I would cook the chicken in the hot sauce first, slowly adding the other ingredients in a certain order: cream cheese, stir until blended; Ranch dressing, mix well again. Transfer to the slow cooker, and sprinkle shredded Cheddar cheese over the top.

About a year ago, the fiance and I went to dinner at another couple’s house, where they had a different buffalo chicken dip as an appetizer. And, they served it with Ritz crackers, which was a surprisingly pleasing change-up from the usual tortilla chips.

“Oh my God,” I said over the card game we were playing before dinner. “Your buffalo chicken dip is better than mine. How can that be? You must send me the recipe. Unless of course, it’s a secret family recipe, in which case, you don’t have to.”

My friend Lauren happily informed me it was not a classified, confidential recipe, and she would email it to me.

“Do you use canned chicken?” I asked.

“Yes,” she said, and a little bit of me died inside.

I checked out her recipe the second I got home that evening. It was from Frank’s RedHot’s website; I do always use Frank’s RedHot sauce myself. Frank’s buffalo chicken dip did indeed call for canned chicken as well. Although, this dip is cooked in the oven, not in the slow cooker, specifies that bleu cheese dressing can be used instead of Ranch, and mozzarella cheese is included in place of the Cheddar.

Since then, I have essentially combined the two recipes which are now merged into my one, perfect, buffalo chicken dip. I have made it in the slow cooker and in the oven, and both work just fine. I still use fresh chicken instead of canned. Additionally, I have taken to essentially mincing the chicken after shredding it, so it’s an even finer consistency; I found that sometimes the shredded chicken could fall off the chip, whereas the very fine chicken pieces mix in better with the rest of the ingredients.

Although bleu cheese is a big staple with buffalo chicken recipes, I opt to stick with the Ranch dressing instead. I do use bleu cheese crumbles mixed in with Ranch dressing for my buffalo chicken salad recipe, but that is a whole other dish, and a whole other story. Ranch fits in better with a dip, I think. Plus, dips are often eaten by many people, such as at a dinner party; Ranch is certainly more universally accepted than bleu cheese.

I do now combine Cheddar cheese and mozzarella cheese, using half a cup of each in my dip. Cream cheese of course is a must, to give it that smooth, dip-like consistency that nicely brings everything together.

When I made my now staple buffalo chicken dip recipe this most recent time, I opted for the slow cooker, as I knew I would be in and out of the apartment. I started as I always do with boiling the chicken to be shredded – I usually use three small to medium chicken breasts. When the chicken is fully cooked it looks so white and pasty, like slightly discolored chalk; it is not quite so visually appealing just yet.

After it’s cooked, I shred it with two forks. Then, I transfer the shredded chicken to my handy Ninja chopper. Of course, one could easily use any type of food processor or even a simple knife to achieve the same effect. After just a few seconds in the chopper, the chicken has been reduced to a fine, almost grain-like consistency, that blends in with the dip as seamlessly as breadcrumbs in a good meatloaf.

The majority of the work is now finished, as I can throw the remaining ingredients into the slow cooker. I no longer bother to cook the chicken in hot sauce first, then add the cream cheese and Ranch, followed by the shredded cheese. No, this dip works equally as well if you simply throw everything together in the pot at once and give it a good stirring. When it is all mixed together it takes on the color of a burnt orangeish red – you can just imagine the fiery hot sauce melding with melting cheeses.

Although I do enjoy buffalo chicken dip with crackers, or even vegetables, I still serve mine with tortilla chips. Those crisp, bland wedges truly allow the distinctive dip flavor to stand alone, obscured by nothing, as it was meant to be enjoyed.